The role and detailed use instructions of rolling swivel

Fishing is a project that requires patience and care. Every mistake in the small steps can lead to a lot of mistakes, but as long as you pay attention to each section, the problem will often be solved. Let’s talk about the functions and choices of some commonly accessories in fishing .

Fishing Swivel,snap, hook,lead sinker(fishing weight), lead sheet, rubber stoper, float  are all basic accessories that connect or run through the main line. They not only have their own basic functions, but also play an important role in the overall sensitivity of the different fishing rigs. The correct choice and use is a necessary basic skill for the fisherman. Only when you choose correctly and rationally match it, can these accessories be We fully enjoy the fun of fishing. 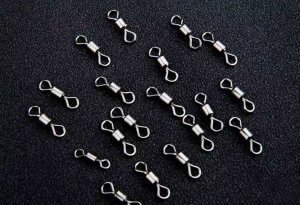 Also called  8-word ring(in china).it’s role is to organically connect the main line and the brain line. As the name implies, the swivel is rotatable (nonsense), and the ring at both ends is free to rotate around the center of the cylindrical alloy metal buckle to prevent the brain line and the main line from being entangled or sprained when subjected to external force. Of course, the more flexible, the more labor-saving, the better. The 8-word ring is named after its 8-character-like Arabic numerals. I understand that the other layer of meaning is inseparable. If the 8 words are separated from the middle, they become two zeros. When you come out to fish, no one wants to get nothing, let alone two. Therefore, the breaking strength also very important. In order to remember the key points in the selection, it is called the 8-word connection swivel. What do you think? But in order to write the words, the following is also referred to as the swivel.

The size of the rolling swivel is from small to large, small enough to be smaller than the rice grain and larger than the fist. The largest swivel used in freshwater and still water suspension fishing is also the size of beans, and the most commonly used is just the size of rice. Most of the swivel is made of brass, and its strength is generally not a problem in terms of fishing. The use of the swivel should be based on the thickness of the line to choose the size of the swivel has two functions: connect the main line with thesub line; Link of the sub line to the bait;

Many fishermen often choose the size of the swivel according to the size of the target fish species (there is some reason), but do not choose the swivel according to the weight, volume, and the effect of the bait signal transmission. Any object in the water will be less affected by the buoyancy of the water. However, the resistance to displacement in the water is also much greater than in the air; the resistance generated by the instantaneous rapid displacement has a greater influence on the signal transmission. If you want to be a fishing expert, be sure to recognize this issue. Because the smaller the resistance of the overall line group in the water, the faster the bait signal transmission, the more accurate and obvious the signal displayed on the float. Now go back to the question of the size of the swivel: while considering the strength of the swivel used, pay attention to the problem of using the small-sized swivel. Don’t forget that the signals that can be displayed on the float marker are accumulated by bits and pieces. suggestions below:

1 Under the premise of the strength of the force, try to use a smaller swivel.

2 Select the rolling swivel that is directly buckled into the middle cylinder with a double ring. This swivel can reduce the probability of winding the main line and the brain line.

3 Each swivel should be checked for its flexible rotation and symmetrical force before it is put into service. Rotating an inflexible swivel affects the separation of the double brain lines and also affects the strength of the main line.

4 It is recommended to select a rotating ring with a rounded end. It is convenient to thread the knot and the strength will be better. The wire of the selection ring is thicker and the strength of the knot is also strengthened.

5 choose to use the regular factory, merchants in the selection of materials, mold production, production process, strength testing and other aspects have strict standards.

Fill out the form below so we can know clearly what you need, I will give you a quick answer.